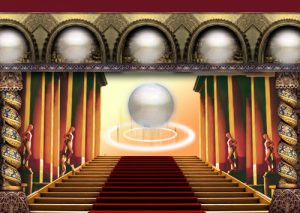 “Fear not, little flock; for it is your Father’s good pleasure to give you the kingdom. Sell that ye have, and give alms; provide yourselves bags which wax not old, a treasure in the heavens that faileth not, where no thief approacheth, neither moth corrupteth. For where your treasure is, there will your heart be also.” (Luke 12:32-34)

(Matthew 6:19-21)“Lay not up for yourselves treasures up on earth, where moth and rust cloth corrupt, and where thieves break through and steal. But lay up for yourselves treasures in heaven, where neither moth nor rust cloth corrupt, and where thieves do not break through nor steal. For where your treasure is, there will your heart be also.”

(Revelation 21:21)“And the twelve gates were twelve pearls: every several gate was of one pearl.”

(Matthew 13:45-46)“Again, the Kingdom of heaven is like unto a merchant man, seeking goodly pearls. Who, when he had found one pearl of great price, went and sold all that he had, and bought it.”

A little over a year after Bill Gates and Warren Buffett began hatching a plan over dinner to persuade America’s wealthiest people to give most of their fortunes to charity, more than three-dozen individuals and families have agreed to take part, campaign organizers announced Wednesday, August 4, 2010.

“We’re off to a terrific start,” Buffett, co-founder and chairman and CEO of Berkshire Hathaway, said in a conference call also attended by Bloomberg and San Francisco hedge-fund manager Tom Steyer and his wife Kat Taylor, founder of OneCalifornia Bank. Steyer said: “We need to support each other. I look at this as replanting your garden so that future generations will have a full bounty of crops.” 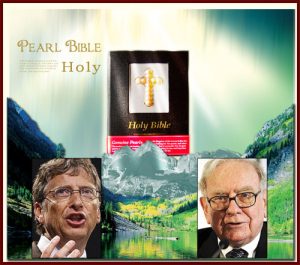 The United States has roughly 400 billionaires — about 40 percent of the world’s total — with a combined net worth of $1.2 trillion, according to Forbes. If they all took the pledge, that would amount to at least $600 billion for charity.
The 40 names that have pledged to date have a combined net worth surpassing $230 billion, according to Forbes. Several of them have said they plan to give away much more than 50 percent of their wealth. Buffett has promised to donate more than 99 percent of his wealth.

In letters on the givingpledge.org website, the 40 billionaires explain what motivated them to follow in the footsteps of Gates and Buffett. The philanthropic billionaires are considering things far beyond their own families. They are thinking about all the people and families in the world as ONE. “Future generations”, “Making the world a better place for generations to come”, “Dedicating to improving education” are the words that we hear the most from them.

$600 billion is a powerful number. We believe it really could make meaningful changes and make the world a better place for our future generations. The Giving Pledge is specifically focused on billionaires “to give to charities or organizations. However, as Philip Oxhorn, an expert in international development at McGill University pointed out: we want more money as more commitment to making the world better. However, unorganized or duplicated efforts could block the success of philanthropic efforts. We don’t want the money to be wasted or counterproductive.

Young generations are the HOPE of the sustainable development of our society. As we are entering the new era of philanthropy, how to educate them to live, work, love and serve as interdependent parts of the world? How to guide their spiritual life? These tasks need us to work together. Collaboration and co-ordination with each other is the only way to be successful. As supporters of Warren Buffet’s plan, our foundation is committed to giving, caring and sharing. In addition, we continue to promote world peace for future generations.

The BIBLE tells us, through Revelation 21:21” The twelve gates were pearls; each gate was made from a single pearl.” The Pearl is the only sacred treasure that is mentioned in all the important books of religion. All the religions give the pearl high honors and consider it God’s given treasure. The value of natural sweet water pearl is not something that artificially cultured pearls (with nucleus beads inserted in them) can be compared with.  There are some biblical quotes referring to the beauty and inestimable value of pearls:  “Also, the Kingdom of heaven is like this. A man is looking for fine pearls, and when he finds one that is unusually fine, he goes and sells everything he has, and buys that pearl.” (Matthew 13:45-46)

“So don’t be afraid, little flock. For it gives your Father great happiness to give you the Kingdom. Sell what you have and give to those in need. This will store up treasure for you in heaven! And the purses of heaven have no holes in them. Your treasure will be safe – no thief can steal it and no moth can destroy it. Wherever your treasure is, there your heart and thoughts will also be.” (Luke 12:32-34)

In the teachings of the Jewish Talmud, there is a particular passage, which says, “The secret of a happy family is to treat your wife like a valuable pearl.” While the Israelites did not ascribe holy powers to pearls, there is a rabbinic story that when Abraham was entering Egypt, he hid his wife, Sarah, in a chest because of her great beauty. At the border when challenged as to the contents of the chest, he said he would pay customs for clothes, gold, the finest silk, even for pearls. The customs officers could think of nothing of greater value than pearls. According to this tale, they demanded that Abraham open the chest. When he did, the land was “illumined with the luster of Sarah’s beauty.”

From the above extracts of the major religion classics, we can clearly see that all major religions mentioned the pearl as the message of peace.  We sincerely hope that we can use Pearl Bible as a medium to enhance the communication and understanding between various ethnic groups. We believe that with our innovative design of the Pearl Bible, the spiritual guidance of thousand years has a modern feeling that can speak to younger generations. Through the Pearl Bible, young people will realize the real meaning and intention of life and the similarities between all of us.

The Pearl Bible is not only of sacred spiritual significance, but, as pearls must grow in clean and pollution-free water, it is more of a reminder to people to care for our survival environment. It is an initiative to protect our water resources and the climate. The proceeds raised by the Pearl Bible can contribute to charities in a significant way.  In terms of the accumulation of wealth on earth, at the moment of the separation of soul and body, everything disappears. The wealth on earth may no longer exist. All religions teach people that “Possession of real wealth is in heaven,” What is the wealth of the eternal heaven?   According to many religions, the pearl is the answer.

We hope each of the 1.4 billion Christian followers in the world will own a Pearl Bible,  especially the younger generation to be attracted to the Pearl Bible and enlightened by the peace and loving messages in it. Together we can make a difference, in many lives.

We welcome you to join us in the Pearl Bible Mission.

If you are a Christian organization, please contact us. Let’s introduce Pearl Bible to your audience together and we would love to donate the raised money to your organization.

If you are a charity organization, please contact us. We would like to leverage the Pearl Bible to contribute to charity in a significant way.

If you are an influential website, please contact us. Internet would be the perfect platform to let young generations know about Pearl Bible and join the mission to contribute to the future.

If you are a big retail outlet, please contact us. Let’s bring Pearl Bible to the mass consumer market and raise money for good deeds.

If you are a media press, please contact us. Please feel free to spread the message to everywhere in the world.

If you are none of the above but interested in Pearl Bible Mission, please also feel free to contact us. We believe that the more people join us, the more opportunities we get to make the world a better place as ONE for the generations to come.